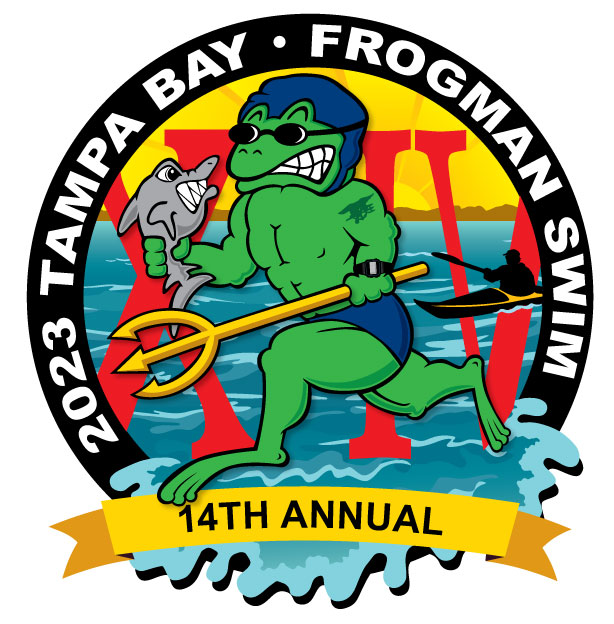 It started over a cup of coffee. Sam Farnan, a senior at St. Petersburg Catholic High School, dreamed of being a SEAL.  But as any veteran of the U.S. Navy’s elite Special Operations unit will tell you, to make muster, you must conquer cold water.

So Terry Tomalin, the outdoors-fitness editor for the St. Petersburg Times, suggested the 17-year-old accompany him on a swim across Tampa Bay. Tomalin and some friends at Clearwater Beach Safety had made the crossing several times in fall of 1996.

Tampa Bay Watch, one of Florida’s leading environmental advocacy groups, heard about the swim and subsequently staged organized races along the same route in the spring of ’97, ’98 and ’99.

That’s when the proverbial light bulb went off in the head of Commander Dan O’Shea USNR.  O’Shea, a former SEAL who had been mentoring Farnan since the boy was 10-years-old, suggested they turn the New Year’s swim into a fundraiser for a SEAL officer who had recently been wounded in Afghanistan. 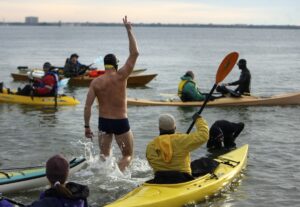 O’Shea enlisted the help of Lt. Mark Lampman, an active duty SEAL, and together the four organized the first Tampa Bay Frogman Swim. Conditions were harsh – the water temperature hovered in the mid 50s – but nearly 40 swimmers managed to make it across the bay and raise thousands of dollars in individual pledges for the injured SEAL officer, Lt. Dan Cnossen and his family.

After the success of the 2010 event, former SEAL and swim coach Rory O’Connor along with triathlete/swimmer Kurt Ott, son of the legendary SEAL Norm Ott, Doug Santo (another SEAL veteran), volunteer coordinator Annie Okerlin, O’Shea and Tomalin put together a follow up to the successful inaugural event.

The 2nd annual Frogman Swim attracted 67 registrants who braved the frigid waters of Tampa Bay and raised $53,000 for the Navy SEAL Foundation which benefits the families of wounded and fallen SEALs. This 2011 race was sanctioned as an official 5K open-water swim by both USA Swimming and U.S. Masters Swimming.

The 2013 event was capped at 150 swimmers and raised over $250,000 for the Navy SEAL Foundation while keeping the expense ratio under 10%.  After competing at the Olympic qualifiers in during the summer, Becca Mann returned to take the podium spot as the overall winner.  Over 400 swimmers, volunteers and supporters joined together afterwards for the infamous post race party and awards ceremony at Hula Bay Bar and Grill.

The 2014 cap was raised to 175 swimmers as the event sold out in less than five hours after registration opened!  Swimmer fundraising and the addition of new sponsors increased our total fundraising amount to over $275,000.  Sponsor New Belgium Brewery provided Fat Tire beer to go along with the all you can eat taco bar at our waterfront post race party at Hula Bay Bar & Grill.

The 2015 event was greeted with exceptional weather and sub 60 water temps. The 175 registered swimmers arose early on registration day as the event was filled in only 33 minutes! Becca Mann (US 10k National Champion) returned to claim victory again and the event raised a record $392,000 for the Navy SEAL Foundation.

The swim portion of the 2016 event was canceled due to severe weather conditions including a small craft advisory and gale force wind warnings.  We did make it to the post race party at Hula Bay to honor the fallen and the Gold Star families.  The 2016 event was still a tremendous success as we raised over $600,000!

The event continued to grow in 2017 as we continually strive to improve the experience, the total fundraising amount exceeded $500,000…and for the second consecutive year, registration sold out in less than 15 minutes.  We were honored to have over 50 Gold Star families in attendance while also paying tribute to friend and event co-founder Terry Tomalin who passed away in 2016. #terrywouldgo.

The 2018 was a record setting fundraising year, $651,000 was raised for the Navy SEAL Foundation! The weather was perfect, but swimmers faced the coldest water temp (53 in the channel) since the inaugural swim. We also honored the life and legacy of one of our staff, Sean Gucken, who passed away in 2016; while also remembering our co-founder Terry Tomalin.

The 2019 event raised the bar even higher, raising a record $720,000!!  Another day with good conditions and warmer water temps than the previous year, hovering in the low 60s. We welcomed a number of new Gold Star family members as we honored the fallen.

The 2020 event raised $700,000 and we celebrated after the swim at the Salt Shack on the Bay, our new post race party venue.

The 2021 event featured a longer course and new finish are, American Legion Post 138.  The event was incredibly successful despite the new challenging course and COVID challenges.  A new fundraising record of $795,000 was achieved!

2022-For the second time in TBFS history, the swim portion of the event was canceled due to weather.  The memorial ceremonies and celebration were still held at Hula Bay, and the event raised a new record of $935,000!